Ok, I have to admit that the provided instructions aren’t bad at all. They actually state (most) of the required steps to do this, with a couple key missing pieces that caused me some trouble and resulted in quite a few trial-and-error attempts. I’m writing this down for my own future reference and hopefully it will save you some time too.

First, why is any of this needed at all? Well, basically, at the time of this writing, neither .NET 5 nor .NET 6 are officially supported in Azure Functions. This means there isn’t a simple dropdown to just set the runtime to the upcoming v4: 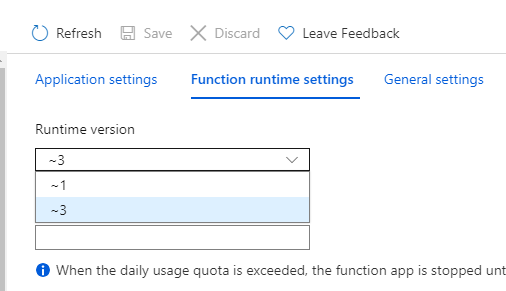 Up to .NET 5, the documentation stated that the only way to get a newer version of .NET running in the current stable Azure Functions runtime was to use out-of-process (OOP), which comes with a non-trivial amount of limitations and requires large changes to your code. The stated benefits of this model don’t outweight the drawbacks, IMHO (at least at this point). Local debugging of the OOP model turned out to be quite annoying too, requiring custom launch profiles plus some startup code to make it passable.

I also usually use zip deploy from Azure CLI in my GitHub Actions which wasn’t enough to set the app with the right configuration to run .NET 6.

If you just want to go explore the sample repo, just go ahead. This remaining of this post explains what’s done there, which is also documented in the repo readme.

The project is basically the same as any other functions project, with the updated TargetFramework:

NOTE: I tried also making the deploy self-contained to work around the az cli deployment but that ended up not being necessary when using func CLI for publish

Even though this goes against the recommended way, using a publish profile, I find it much more convenient for CI to use an Azure Service Principal instead. The reason is that I can scope these credentials easily to the entire resource group, and perform other Azure CLI operations I typically need while deploying a real app to production from a workflow.

For this, run the following Azure CLI command:

Copy the resulting JSON that in the output and add it as a secret to the repo, such as AZURE_CREDENTIALS. The workflow uses this secret to perform an Azure Login with:

NOTE: since I’m deploying only from main branch, condition the step to that. This also ensures we don’t try to use the secret for PR from forks, for example, where it wouldn’t be available by default.

Next comes the Azure Functions v4 CLI tools. As noted in preview instructions, you need to deploy using their v4 func CLI tools.

Zip deployment with the Azure CLI will not work. This caused me quite some pain, since even if you can explicitly set the FUNCTIONS_EXTENSION_VERSION function app configuration in the portal to ~4, there is an additional netFrameworkVersion setting the func v4 tools sets but can’t be (I tried!) set manually. The func publish command mentions it when it runs:

And then builds and publishes:

You may be tempted to pass the flag --no-build to speed things up here. This didn’t work for me and I ended up with a non-working function app. Since you will typically need to tweak build arguments, it’s neat that the func tool will just invoke dotnet publish passing any args you specify after --dotnet-cli-params. Note the ` – ` (surrounded by whitespace) that’s required to seamlessly pass additional args verbatim (without resorting to additional quotes or anything).

I know ASP.NET Core 6 minimal APIs are getting quite a bit of attention, but this looks pretty minimal to me for a typical Azure Function app:

Using records to inject dependencies is so nice, as well as for the payloads themselves. And since you will most likely be annotating parameters with bindings and other cross-cutting concerns, I don’t find the lambda-based minimal APIs all that compelling. My guess is that you’ll end up moving those to separate methods anyway, and that point all you’re gaining is not having the “wrapper” class. But that’s what gives you nice class-level DI that’s shared across all functions/methods, which is nicer than repeating all arguments in each method anyway… Dunno, we’ll see how people use that in the wild, I guess.

As for additional configuration you might need before your app starts (the builder phase of minimal APIs), Azure Functions provides a simple enough hook to do that too:

In this case, I’m adding ASP.NET’s appsettings and dotnetconfig, for example, and I could also configure DI/services to inject too, just like in “regular” ASP.NET.