API exploration, whether third party or your own, is a necessary and unavoidable part of regular development. There are many mechanisms available today for doing such exploration in a one-time, throw-away style, but it might be worth considering keeping those explorations around in your code base and even make them easily executable within the IDE afterwards, for further learning or other team members’ benefit.

Typical ways you can tackled this are:

The “trick” is to simply extend both FactAttribute and TheoryAttribute to check for the right environment variables and skip the test by default otherwise:

NOTE: you could even name them Sample* instead of Ide*, if that’s the purpose they serve, just to make that clearer when browsing the code.

When you apply the [IdeFact] or [IdeTheory] attributes, tests are discovered by the built-in VS runner as well as the command line one, but they will be skipped unless runnning inside Visual Studio. The environment variable VSAPPIDNAME is set by devenv.exe and is propagated to the child test discoverer and runner from within VS. I’ve also added a check for CI so they never run in a build server, just in case.

Given the following code:

You can run them all from VS: 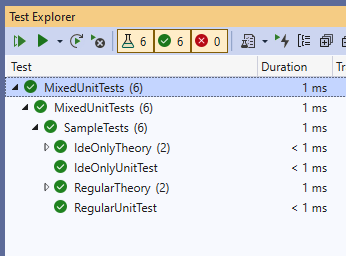 But from dotnet test, you’d see:

So nowadays, I use a mix of SmallSharp and IDE-only unit tests. And as soon as TestDriven supports 64-bit VS2022 I’ll likely add a mix of ad-hoc too.